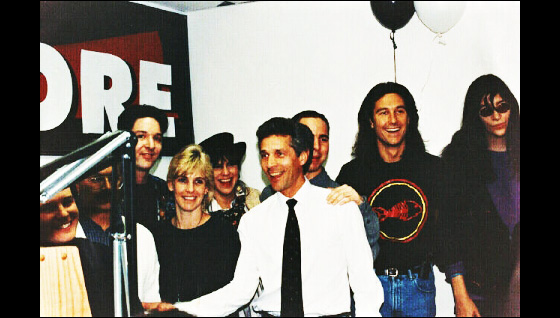 The station was bought in October of 1992 by Jarad Broadcasting, and on November 9, 1992, WDRE New York started simulcasting its programming with WIBF. Shortly after the simulcast began, WIBF's call letters were changed to WDRE (the same calls as WDRE New York). It was decided however in 1995 that WDRE New York would change its call letters back to WLIR, thus making WDRE Philadelphia an independent local modern rock station.

Veteran Philadelphia DJ; Mel 'Toxic' Taylor (WPST, WIFI), was the first DJ hired for the only 2 local shows, that would be live from Philadelphia each week. When WDRE Philadelphia became a local radio station, talent was hired from within the city (ie Bret Hamilton, formerly of WIOQ), and outside of the city. While WDRE never became a true mainstream radio station in the Philadelphia radio market, the station gained a cult status in the Philadelphia area, and as a result, events like the station's music festival held in (known as "DREfest") sold out to a crowd of over 25,000 people.

However, in December of 1996, Radio One bought WDRE from Jarad Broadcasting, and it was announced that WDRE would be permanently kicked off the air for a Hip Hop/R&B radio station. Due to the informed notice of the station's flip, the staff at WDRE were able to organize a concert called "Bitterfest", which was to be held at The Electric Factory. The concert featured local acts G Love and the Fun Lovin' Criminals, and was created to celebrate the life of WDRE as a local institution for modern rock. On February 7, 1997, "Bitterfest" was held to a sold out crowd of over 3,000 people, with all of the WDRE staff present at the event.

At midnight on February 8, 1997, a lucky (or unlucky) listener was selected to "pull the plug" on WDRE, and from then on, WDRE ceased to exist.